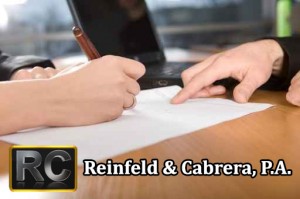 A contract is one of the most frequent legal transactions that you will be involved in at any one point in your adult life. No matter what situation you find yourself in that requires a contract, having a basic understanding of contract law is crucial in building solid agreements that will be legally enforceable should a disagreement crop up.

In a nutshell a contract is an agreement that is legally enforceable between two or more parties. The word party includes an individual person, company, or corporation. Contracts made in Coral Springs are governed and enforced by laws in Florida. With this basic definition in mind here is a run down of the overall benefits of having a contract.

Having a watertight contract leaves you open to get right in and do the job itself without worrying about all the legal issues. A few of many benefits of having a contract include; protection for both parties should a dispute arise; ensuring that the agreement entered into by parties is fair; and that all details of the agreement are explicit – this includes that all definitions are stated and agreed to by all parties to the contract. In other words making sure that everybody is on the same page. Therefore if things do go wrong it is always a good idea to have all your bases covered and to make sure that the relationship between both parties is clearly defined in a contract.

A further benefit to having a contract drawn up is that written agreements are far easier to put into effect and enforce than verbal agreements. A professionally drafted contract will be a physical reference point that you can revert to in moments of need. Moments of need include; disputes between parties; recalling important details; or a means of orientation for newcomers to the agreement.

If all of the above factors have still not convinced you that a contract is nothing but beneficial then perhaps the idea of you being the master and commander of your agreement will grab your attention. If you don’t have a written agreement local and state laws will dictate some of the rules for your agreement. If a dispute arises which has not been covered by a written contract, the issue may be taken to court to be resolved. This could leave you on the short end of a very costly stick.

So, under what circumstances do we recommend that you make use of a contract? From rental agreements, business partnerships, and employment contracts, to contracts of sale, prenuptial agreements, and wills, the list is truly endless.

The laws governing contracts in Coral Springs can become overwhelming however, experienced attorneys, such as Reinfeld & Cabrera P.A. are always here to help you.